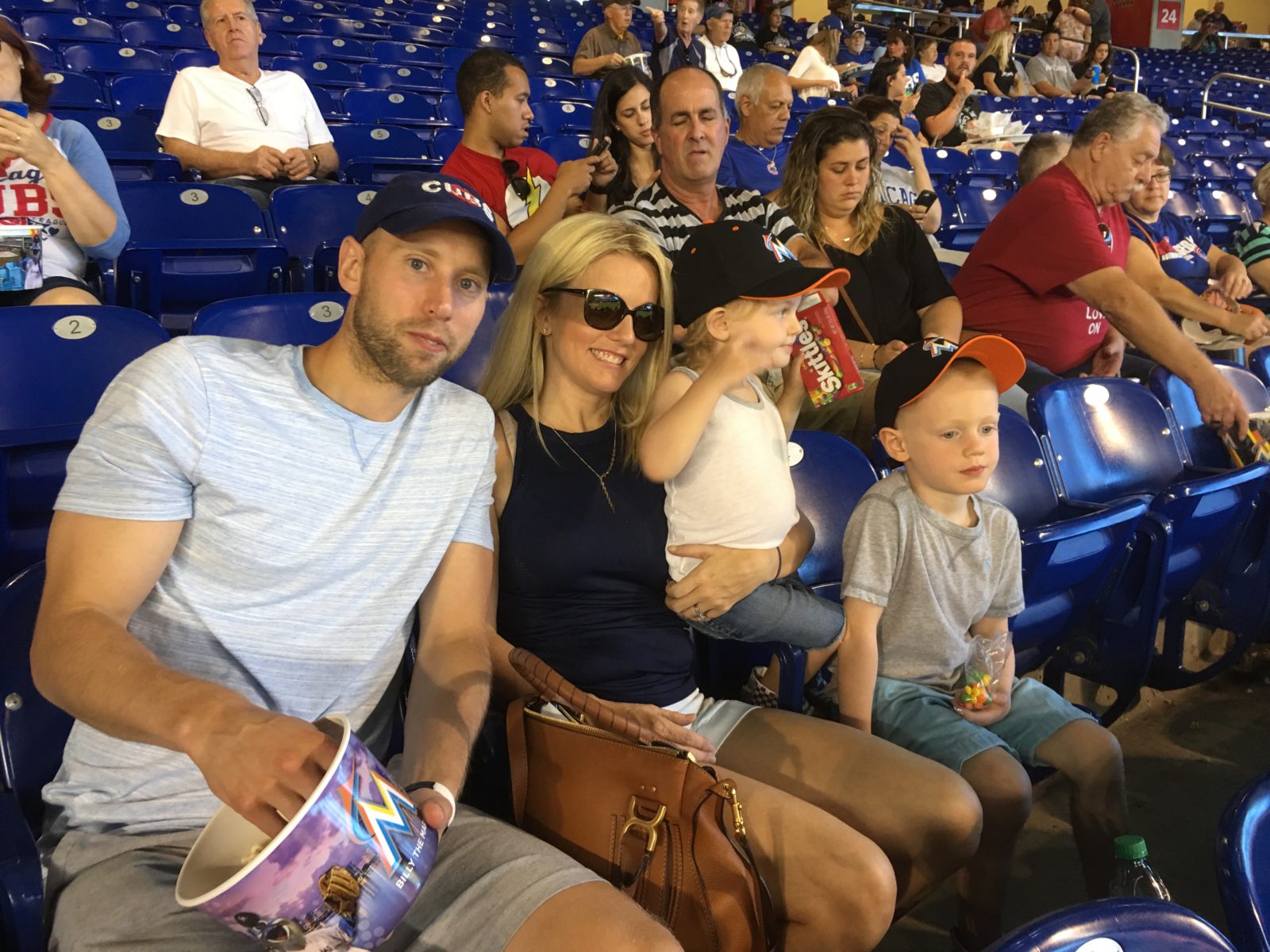 The offseason always feels so rushed with a million things to do. Craig and I always try to jam a year‘s worth of “things to do” into a four month timespan. 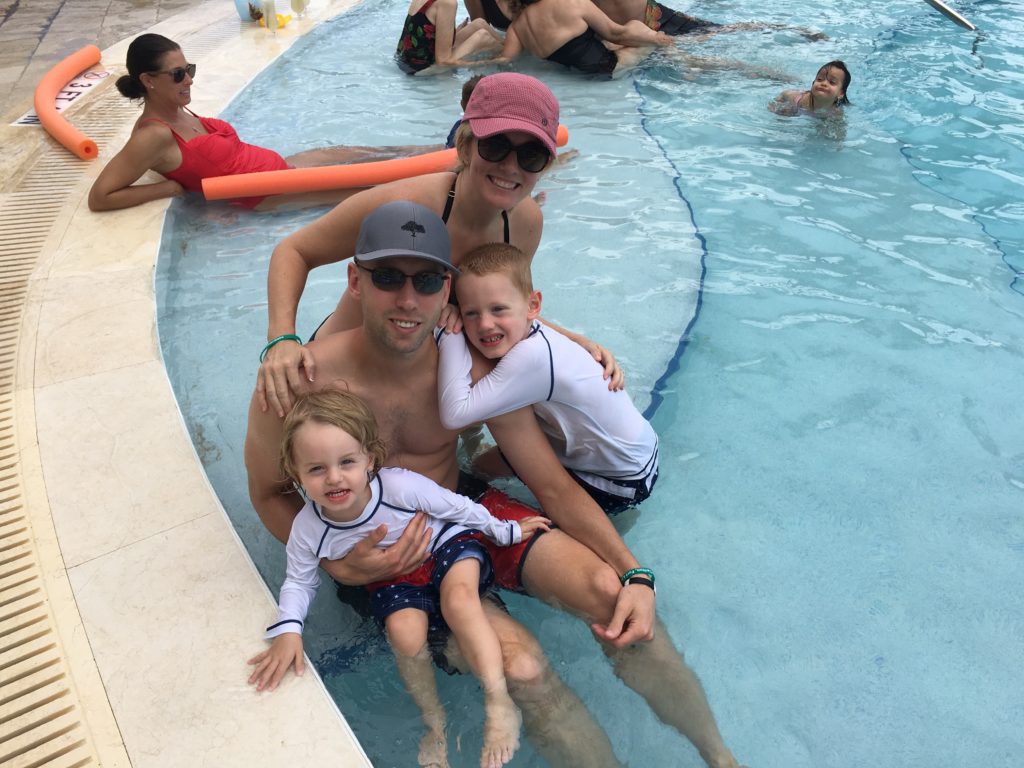 One of our major priorities is to plan things as a family.  This past summer, we made a conscious effort to plan activities for our boys.   Since Craig has a regimented work-out plan, our life always revolves around hockey with a work-out schedule, goalie school, and ice time.  We created a calendar to help us plan everything we wanted our boys to do, whether it was a Disney trip or just a simple day to fish, it was on our calendar.  Looking back, we both can say our boys had a great summer.
House Renovations
Besides trying to build memories as a family, we decided to tackle many renovations in our home.  We painted the inside of our house, installed new wood floors in our master bedroom and office, and polished the marble in our house.  In June, we decided that we would tackle hiring a pool company to fix the leak in our pool; which lead to a pool remodel and landscaping changes.  The projects were overwhelming!  A lot of thought went into planning all the details for every renovation.  It was fun, yet exhausting.  Our minds were so preoccupied in our children and home repairs.  We never thought we were about to encounter this crazy path coming our way.
A Blessing in Disguise
In June, Craig and I were so excited to learn we would be expecting our third child in March. The first trimester was an emotional roller coaster for us.  At 10 weeks, we decided to do the Panorama non-invasive blood test.  This blood test reveals possible genetic defects and the gender of the baby.  After taking the blood, we patiently waited for the results.  Our doctor phoned us and explained that there wasn’t enough fetal faction in the blood and we had to redo the test.  We redid the test at 11 weeks and got the same results—not enough fetal faction in the blood. Our doctors became very concerned stating this is a sign of an abnormality.  We were referred to a genetics doctor and they administered a CVS.  Once again, we waited a long two weeks for the results.  When the results came back,we were notified it was a healthy baby girl.  We were over the moon and so relieved. The boys were so excited to be having a sister. At the end of September, I thought I was going to a routine ultrasound.  At the ultrasound, I learned that our baby girl measured three weeks behind, which included heart defects and an undeveloped cerebellum.  I remember sitting there–just devastated and feeling numb.  How could this be happening when the CVS told us otherwise? I remember thinking…we can fix her heart, but no brain? What was happening? I immediately phoned my husband and had the doctor talk to him.  I couldn’t speak.  We were told that our daughter would never live a normal life.  There was the possibility of stillborn baby or a baby that would lay lifeless.  We were given the option to terminate the pregnancy.  I kept praying to GOD please don’t make us have to make this decision.  My world crumbled before me.  It was all happening so fast, but praise the LORD, He made the decision for us and we miscarried at 16 weeks, three days later.
The Diagnosis
During the pregnancy in August, I noticed a little congestion setting in.  As we all know, congestion is a part of pregnancy. I started experiencing coughing phlegm, dry mouth, night sweats, and extreme tiredness.   These are all symptoms of a cold or even pregnancy.  I called my OBGYN and was prescribed an antibiotic.  I completed the antibiotic and flew to Mt. Tremblant to meet my husband for a little preseason get-to-together.  My ear was crackling.  It had a full feeling.  It continued to pop as if I were on an airplane.  I associated these symptoms with my cold, travel,  and never thought it could be anything more.
After the miscarriage, the congestion did not subside.  I called the team doctor for an appointment.  He felt the lump in my neck, and advised me to get an ultrasound of my lymph node which led to a suggested biopsy.  At the time, I was in Pennsylvania visiting my family and friends. The purpose of my trip was to sit through chemo with a my girlfriend, Crystal, who is battling breast cancer.  I never thought in a couple days from this point I would be in the cancer club too.  I am so thankful The Flyers Organization referred me to an oncologist ENT, Dr. Chetan Nayak.  He biopsied my neck and also found a nasal mass.  The report from the biopsy indicated there was cancer in my lymph node.  Craig flew home immediately.  The following day, I was in surgery to biopsy the mass they found behind my nose.  After gathering all of the information from both biopsies and multiple tests, I was diagnosed with nasopharyngeal carcinoma.
P.S.  Nasal scopes are not fun!

42 thoughts on “In a Blink of an Eye Life Changes”